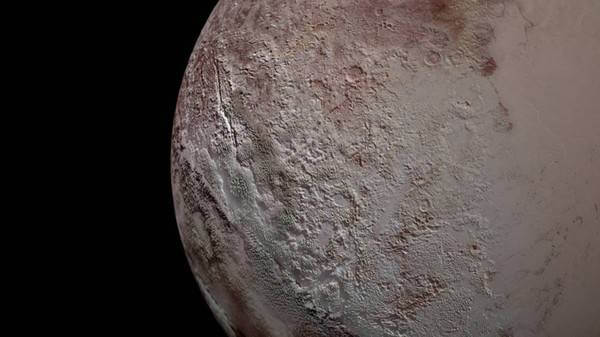 Pluto, a planet that used to be one of the big nine, might have oceans under its surface.

Plutowas thought to be entirely frozen over 800 million years ago but a discovery of a gaseous layer reveals that there might be liquid below the planet’s icy exterior.

Pluto — famous for being reclassified as a dwarf planet — might not have a heart of ice after all. In fact, every bit of Pluto was assumed to be frozen over considering its distance from the Sun.
But, a new study published in Nature Geoscience by Japanese astronomers thinks that there might be an entire ocean underneath the planet’s icy layer.

Their theory is that gas serves as the barrier between the two states of matter. It’s insulation allows the ice to remain cold on the surface, as a warmer liquid ocean flows below.

To maintain an ocean, Pluto needs to retain heat inside. On the other hand, to maintain large variations in its thickness, Pluto’s ice shell needs to be cold Not so frozen after all A widely accepted theory is that Pluto might have started out with liquid oceans but they would have been completely frozen around 800 million years ago — around the same time that animals first started to appear on Earth.

But this new data shows that the oceans are barely frozen thanks to the insulation from gas — called a ‘gas hydrate’ layer or ‘clathrate’. So what would have ordinarily taken a 100 million years to freeze, won’t freeze for over a billion years thanks to the gas, which the researchers suspect is most probably methane.

The most likely clathrate guest gas is methane, derived from precursor bodies and/or cracking of organic materials in the hot rocky core. Excerpt from the study published in Nature Geoscience Far reaching implications Determining that the dwarf planet might have an ocean at its heart doesn’t only apply to Pluto but planets, far and wide, across the galaxy.

It provides the possibility that other planets, that look like they’re made of ice, may actually have liquid underneath the surface — and the Universe might have more water on it than initially suspected.