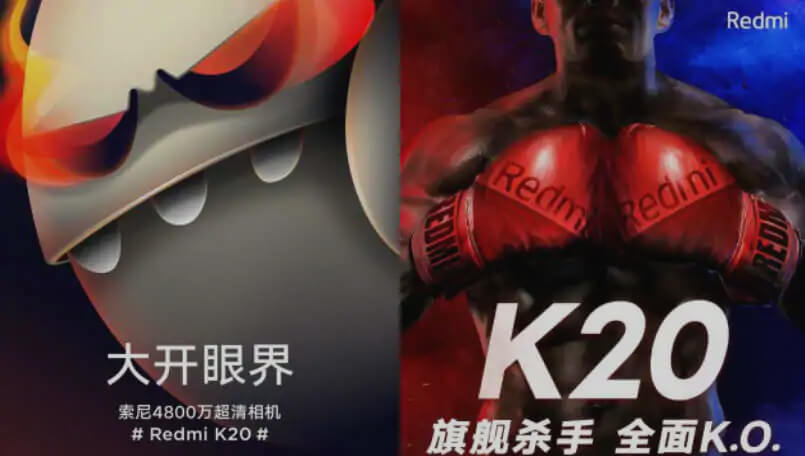 The Redmi K20 is widely anticipated to be the much rumored Snapdragon 855-powered flagship smartphone from the company. This will be the first flagship to debut under Redmi brand and is expected to launch in markets like India as the Poco F2. It has already achieved an impressive benchmark score on Antutu and the company has been teasing it as the “flagship killer” after the launch of OnePlus 7 and OnePlus 7 Pro. In terms of features, the Redmi K20 is expected to feature an AMOLED display protected by Corning Gorilla Glass 6 and in-display fingerprint sensor.

The leaks so far hint at Xiaomi launching two devices in the Redmi K20 series, which will differ in terms of features. There is rumor of a regular variant with standard specifications and a Pro model supporting additional features like 27W fast charging. The smartphone is said to pack a 4,000mAh battery and a pop-up selfie camera to take on OnePlus 7 Pro in the mid-range premium smartphone segment. Lu Weibing, the General Manager of Xiaomi’s Redmi brand, has confirmed that the primary 48-megapixel sensor will also support slow-motion video recording.

Weibing released a teaser video showing the ability of the smartphone to record super slow-motion video at 960 frames per second. The leaked specifications point at a 6.39-inch OLED display with Full HD+ resolution and 19.5:9 aspect ratio. It will feature a 20-megapixel pop-up selfie camera while the primary 48-megapixel camera on its back will be paired with a 13-megapixel ultrawide angle camera and an 8-megapixel telephoto camera.

There is no clarity on RAM but Redmi K20 is expected to arrive with 4GB or 6GB or 8GB of RAM and up to 256GB internal storage. The Redmi K20, since it could debut as Poco F2 in India, is expected to be the cheapest smartphone with Snapdragon 855 when it becomes official later this month. The smartphone is tipped to be launched in Carbon Black, Glacier Blue and Flame Red color options.